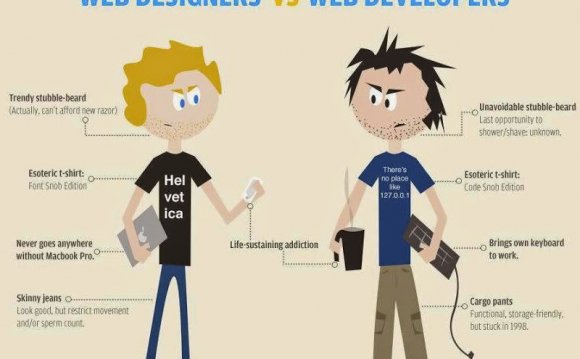 Way back in 2013, when I first started to get interested in learning to code, I remember being confused about something: was I training to be a web designer or a web developer?

I remember thinking that being a designer sounded GREAT. I’d get to create beautiful things for the Internet, and use up all my creative juices on typography pairings, color schemes, and giving websites that certain je ne sais quois. At the same time, though, I worried I wouldn’t have what it takes to be a web designer. With no history in graphic design, or any design training at all, I wondered who would ever trust me with the aesthetics of their site.

And when I thought about web development? I felt like: “This is what I should want to do. I’ll make a ton of money and have all the power in the world to build awesome websites and web apps. But what if it’s boring?”

But as I learned HTML and CSS, met more designers and developers, and started working on my own freelance websites, I realized that I had it all wrong. It’s not that you don’t have to make a choice between web design and development. Really, the issue is that my idea of the differences between web design and web development were pretty wide of the mark. This is the blog post I wish I could have read when I first dipped my toe in the technical waters.

This guide is based on general personality characteristics and a synopses of day-to-day tasks. If some of it seems oversimplified, that’s because I want to make it super simple for you to make a decision. In reality? There is a TON of overlap between web designers and web developers, and there’s no right or wrong starting point!

Before you can make any decisions about what kind of tech career you want, you need to make sure you know exactly what web designers and developers do.

If you’re like me, you’ve probably been socialized to define “web designer” and “web developer” in ways that don’t represent what it’s actually like to be one, and you’ve never even talked to a real-life web designer or developer.

My biggest misconceptions about designers and developers had to do with how much money they make, how steep the learning curve is, and what kind of work they actually do. I mistakenly believed the myths that:

Some assume that because development involves higher level programming, it will be harder to learn than design. Others see design as more difficult because they think that it requires more innate (rather than learned) creativity.

In fact, when you’re starting from scratch, any new skill is a challenge. Web development and web design aren’t inherently more or less challenging—your strengths and weaknesses will dictate which is the path of least resistance for you.

Developers make far and away more $$$.

If you look at average salaries, it does appear at first glance that web developers make far more money than web designers:

But if you start searching more specific areas of web design, you’ll see that the salaries are competitive:

It’s true that on average, developers make more money, but as a beginner this isn’t something you’ll have to worry about. Whether you start learning web development or web design, you probably won’t be a senior full-stack developer (and make the very top salary) within a few months, since that usually requires several years of experience.

And besides, web designers make plenty of money. Since both are lucrative options, it’s better to choose what will make you happier rather than what you think will pay more.

On the contrary, web designers write HTML and CSS code. And some (!) even use a CSS preprocessor like Sass or LESS and write JavaScript. For example, say they need a smooth scrolling site—some designers (we call them unicorns!) can code it up themselves.

Now, there are some designers out there who don’t code, particularly print designers and some digital graphic designers, but most WEB designers can turn their designs into working prototypes using HTML and CSS. The best way to make good money AND be able to deliver what clients and employers want most, is to be a whole package of designing and coding magic.

Web designers who can code, especially those that have next-level skills like Sass and JavaScript, are in HUGE demand. We call them unicorns. And, if you start out with the Skillcrush Web Designer Blueprint, you can take Skillcrush 102 as an individual class after that to learn JavaScript and jQuery and become one of those elusive unicorns!

But I’m getting ahead of myself. You need to know what designers and developers actually DO all day!

Step 2: Figure out EXACTLY what designers and developers do.

Now that you’ve gotten some of the myths cleared up, you need to know how designers and developers actually spend their time.

What Is A Web Designer, A Web Developer and A Web Partner?